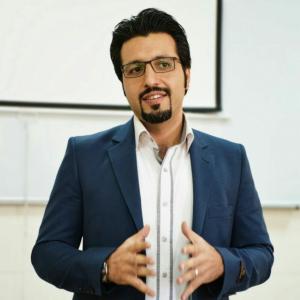 Sadegh Karimpouli is currently Assistant Professor in exploration geophysics and rock physics at University of Zanjan, Iran. He received his PhD in seismic exploration in 2013 at Amirkabir University of Technology, Tehran-Iran. During his graduate studies, he worked on reservoir characterization, facies inversion and diffraction delineation from seismic data. Since 2013, his focused on Digital Rock Physics (DRP) and tried to find ways to estimate 3D properties of rock using 2D thin section images. He also developed DRP studies in the field of Deep Learning and especially Convolutional Neural Networks (CNN) for rock image segmentation and estimation of rock physical parameters such as elastic moduli.

An overview of publications and citations (Google Scholar).

December 2020: ROCKETH is co-organising a Rock Physics Session at EGU 2021 in Vienna, Austria! Details can be found here!

October 2020: You want to be informed via eMail about the next minisymposium? Register here!

September 2020: Due to Corvid-19 we decided to postpone the 10th Minisymposium of Poroelasticity to 2022. Due to the current circumstances we are not able to organize a fruitful and save meeting in February 2021. We apologize and looking forward to meet you in February 2022!